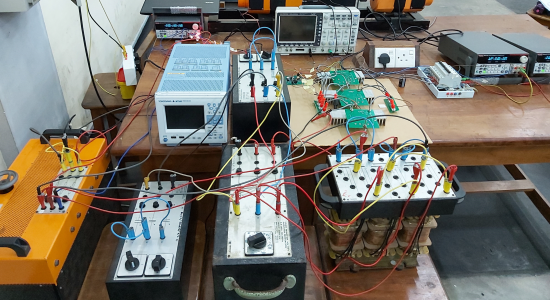 In this project, a PV inverter to work as a harmonic filter for compensating the current harmonics in the distribution grid was proposed.

Current harmonics is becoming a problem in distribution grids due to increase use of power electronic loads and distributed generators which are connected to the grid via power electronic converters. Current harmonics injected by power electronic based loads and generators cause significant distortion in the grid current. Generally dedicated active and passive filters are used for compensating the current harmonics in the grid. Increase adoption of solar photovoltaic (PV) systems in distribution grids can be observed all around the world. These PV systems are connected to the distribution grid via inverters. Inverter is a power electronic converter and it can be controlled to inject harmonic compensation current if required. In this project, a normal PV inverter to work as a harmonic filter for compensating the current harmonics in the distribution grid was proposed. This function is added as an ancillary service from the PV inverter to the grid. The objective is to reduce the Total Harmonic distortion (THD) values of a certain load, which has an inverter connected to it. An improvement in the THD level of the grid current is expected with several inverters, which are controlled locally to reduce the THD level of the current drawn from the grid.

Design and of an Assistive Exoskeleton Robot for Rehabilitation for Post-stroke Recovery Dr. Subodha Gunawardena, Ms. Tharinda Rajapaksa and Ms. Upeksha Chathurani Patients with disabilities in the upper extremity are recommended to undergo therapy to regain motor skills. This work is focused on design and simulation of an assistive exoskeleton rehabilitation robot for the upper…

A Continuous Monitoring Wearable Device for Elderly People Vidyawansha C.J., Chamalka W.H., Priyanga H.G.A., Ajmal A.A., Jayatunga E.H. The aim of this project is to implement a reliable energy monitoring system which can measure current and voltage values to calculate useful parameters in order to produce useful outcomes or to carry out certain functionalities like…

MPPT Technique Based on Perturb and Observe Method for PV Systems Under Partial Shading Conditions Dr. Iromi Ranaweera, Raziya, M. Afnaz, S. Jesudason, I. Ranaweera and H. Walpita An algorithm to track the maximum power point of a photovoltaic panel under partial shading conditions was developed and tested via simulations and hardware implementation. Key Words:…