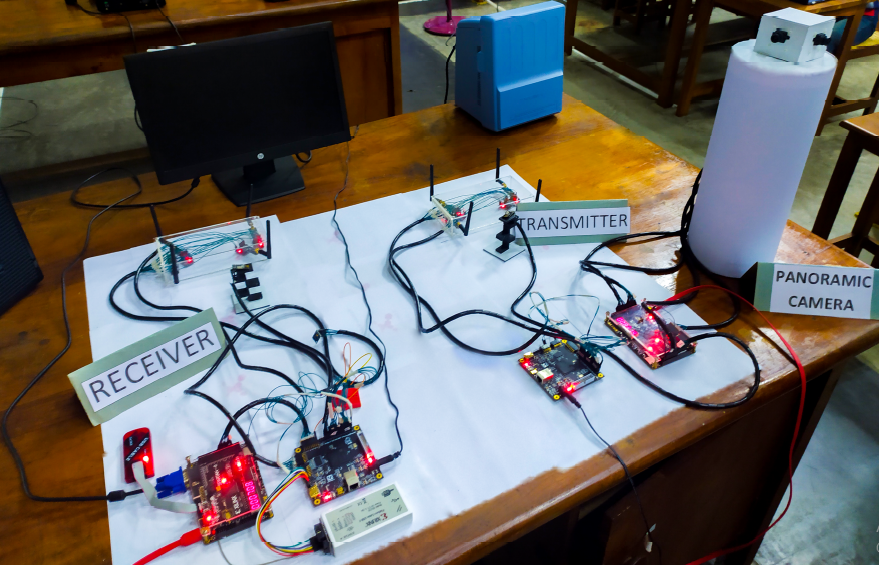 The work that has been done in is the development of a hardware implemented system using Field Programmable Gate Arrays (FPGA) for real-time wireless transmission of a panoramic video stream. As the transmission of a wireless video requires a higher throughput in this work, the system was developed focusing Multiple Input Multiple Output (MIMO) technology which specifically uses Spatial Multiplexing (SM) to increase the data rate of the transmission. We save the transmission bandwidth by only transmitting the Region of Interest (RoI) of the Panoramic stream. Four cameras were used for implementing the panoramic camera and 4×4 MIMO transceivers were used to transmit the RoI of the video stream. There is an additional transceiver pair as a feedback channel to send the accelerometer reading from the receiver side to decide the RoI of the Panoramic Stream. 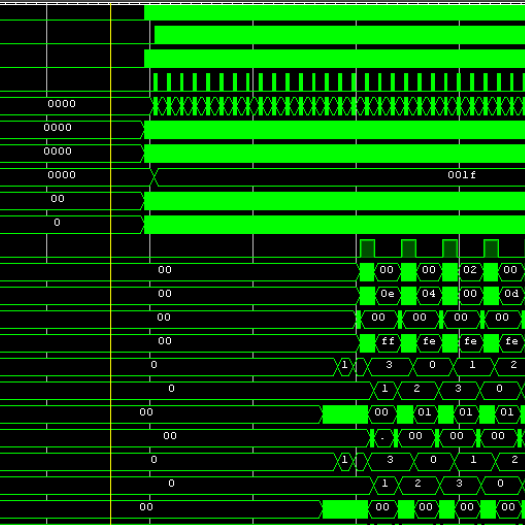 Panoramic video streaming is predicted to be the next disruptive innovation to the world due to the upcoming advances in network bandwidth, storage capacity, available high computations etc. This project addresses the problem of wireless transmission of a real-time panoramic video through a wireless medium maintaining challenge-able quality parameters like bandwidth efficiency, perceivable quality, and low latency in a hardware implemented system.

As the initial step of the project; camera, accelerometer, LCD and transceiver were separately configured and tested checked by connecting to the FPGA board and observing the signals using an oscilloscope. Then, a wireless transmission path was established using a single transceiver pair for transmitting a set of ASCII characters using UART protocol between 2 FPGA boards for the transmitter and receiver sides and observed using a terminal. After that, the transceiver pairs were increased and multiplexed transmission system was verified. Finally, the panoramic camera and feedback channel of the system were implemented for detecting the RoI of the panoramic camera according to the user trajectory. The system requires I2C and Serial Peripheral Interface (SPI) communication protocols for the communication with 4 cameras, accelerometer and 5 transceivers, LCD display respectively. The project was simulated using ModelSim and Vivado XSim simulators and after that, the panoramic camera, primary transmitter and primary receiver were implemented in 4 FPGA boards using Vivado, ISE design suite Electronic and Design Automation (EDA) tools.

An effective rudimentary transmission of a panoramic video maintaining minimum QoS parameters for a resolution of 160*120 with a frame rate of 12 Frames Per Second (FPS) having with a latency of 331 ms for a remote display could be achieved after the successful configuration of cameras, wireless transceiver modules, and FPGA boards.

Study on Different Feeding Techniques of Textile Microstrip Patch Antenna Jayathunga E.H. , De Silva D.S., Amunugama C.S.B.M.R.N.L.K., Helapita L. and Nagahawaththa T.H Microstrip patch antenna is a suitable candidate for wearable textile antenna as it is a flexible, planer and directional antenna. In this antenna, the radiating patch is placed on top of the…

SL-Fleet: Fleet Monitoring System D.M.T. Sasindula, H.M.P.B Piyathilaka,  M.J.M. Rasha , S. Gunawardhana This project features the first phase of the design and development of a fleet monitoring system over cellular networks using mobile data. The system consists of an embedded device to be fixed at the vehicle and a server side application at the…

RehaBot: Design and Development of Upper-limb Exoskeleton Robot for Stroke Recovery P.V.N.U. Madhumali,  N.M.P.M. Nishshanka, H.M.C.M.B. Herath, S.Gunawardhana  This project features the first phase of designing and developing an Exoskeleton Rehabilitation Robot with 2-DoF (degrees of freedom) for upper limb rehabilitation. The robot is targeted to work in Active, Passive, and Passive-mirrored modes with the…

Design and of an Assistive Exoskeleton Robot for Rehabilitation for Post-stroke Recovery Dr. Subodha Gunawardena, Ms. Tharinda Rajapaksa and Ms. Upeksha Chathurani Patients with disabilities in the upper extremity are recommended to undergo therapy to regain motor skills. This work is focused on design and simulation of an assistive exoskeleton rehabilitation robot for the upper…

A Continuous Monitoring Wearable Device for Elderly People Vidyawansha C.J., Chamalka W.H., Priyanga H.G.A., Ajmal A.A., Jayatunga E.H. The aim of this project is to implement a reliable energy monitoring system which can measure current and voltage values to calculate useful parameters in order to produce useful outcomes or to carry out certain functionalities like…