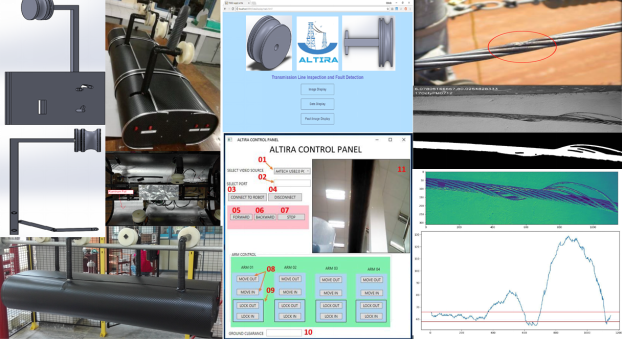 Power transmission network is the most critical part of a power system due to its connectivity with generation and distribution stations. Though it is a riskier employment to carry out the routine inspections of the transmission lines manually, the task of inspection is imperative to the continuous operation of the power system. However, the new trend of transmission line inspection is based on extracted details of the lines by means of Remotely Operated Vehicles (ROVs) traversing through them. This project proposes a method being tested by a prototype for traversing alone the transmission conductor, inspecting the line through real time video streaming, detecting faults and pinpointing them through Geo Tagging. Automated transmission line inspection and fault detection is proposed to carry out through image processing and sensory data acquisition. Radio Frequency (RF) technology is the main communication mechanism between the operator and the ROV. This technology will expand the remotely operating distance of the ROV. Furthermore, a mechanism was developed to enable the robot to cross over from one span to another in the transmission network which include suspension type insulators. 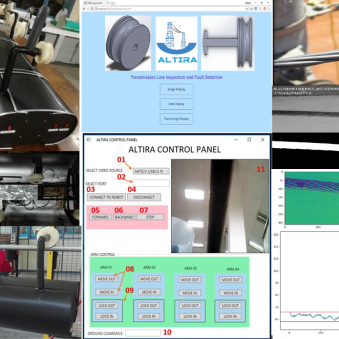 The conceptual diagram of the proposed system (referred as ALTIRA) is shown in the figure above.

Motor controller is the main controlling device which is used to control the forward and backward movements of the robot. ALTIRA consists three Direct Current (DC) motors which are embedded with each arm. So controlling of speeds of those motors is very much important to maintain the smooth movement of the robot speed with synchronized horizontal motion.

Inputs for the robot circuit can be categorize as data inputs and power inputs. Transmission line inspection need wide range of data regarding the transmission line, so various kind of data input devices are used to achieve those requirements.

The proposed approach is an adaptable and economical solution for high voltage transmission line inspection task. A ROV can reach all the corners of the transmission conductor and provide accurate fault detection results. All the appliances used in the ROV are available in the local market and the technologies and software being used are not rare. Also the electrical and magnetic shielding of the prototype have been tested under laboratory conditions to seek the withstand-ability of the ROV shielding. The tests have proven successful to be deployed in actual transmission line. Moreover, the proposed image processing based fault detection method has immense potential for automating the entire transmission line maintenance process. However, the operating time of the prototype ROV is considerably low due to its high energy consumption. An energy harvesting method could be used to conserve the energy and improve the operating time while it reduces the weight accounted for the battery.

2nd phase was initiated in 2017 where the focus was to improve the mechanical design of the ROV in addition to image processing based autonomous detection of damages in HV transmission lines laid over suspension insulator for LYNX conductors.

Real-time Low Cost Subcutaneous Vein Detection System based on Near-Infrared Spectroscopy Wanniarachchi T.G., Tharushika R.T.P., Panthaka W.S.P., Jayatunga E.H. The major problem faced by nurses today is difficulty in accessing veins for intravenous drug delivery and other medical situations. Although a peripheral vein can be accessed with a single attempt occasionally, for substantial number of…

The aim of this project is to implement a reliable energy monitoring system which can measure current and voltage values to calculate useful parameters in order to produce useful outcomes or to carry out certain functionalities like device identification, pattern recognition, cost prediction etc. For this a set of smart plug devices are connected to a central device via wireless technology.

The aim of this project is to implement a reliable energy monitoring system which can measure current and voltage values to calculate useful parameters in order to produce useful outcomes or to carry out certain functionalities like device identification, pattern recognition, cost prediction etc. For this a set of smart plug devices are connected to a central device via wireless technology.